Aug 08 Posted by Sharleen Kneeland in BC Real Estate 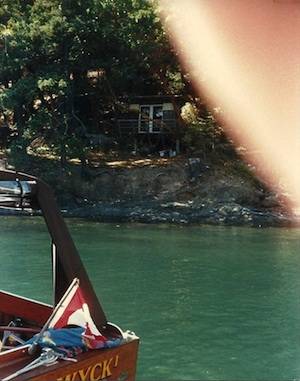 View of our Henry Island Cabin from the Water

Growing up in Sidney, B.C., I spent many summer days with my family out on the water in our boat. We cruised around both the Gulf Islands and the nearby San Juans (in the U.S.) and moored at various locations, which allowed us to explore the smaller islands. Many of these islands were (and still are) boat-access only and the historic sites remain relatively unchanged, except by the hand of nature. On these islands, the historic spots are seldom marked with museum-like placards and tour guides are obviously not available at your beck and call. Often what is left to discover on your own are the lonely windswept and crumbling foundations of old homes and the vestiges of times long gone. On our trips, we explored the remaining relics from old homesteads, investigated weathered pioneer cabins and even found oddities such as an abandoned bomb shelter. The Gulf (and San Juan) Islands are rich in history and culture. In the early days, they were settled by an amazingly diverse band of pioneers. Visiting the islands by boat allowed us to step into the lives of these early pioneers. In this first (purely self-indulgent and nostalgic) post, I'm going to cover our family trips to our waterfront cabin and fond memories of our boating summers in the San Juans (along with a bit of history and real estate thrown in for good measure). 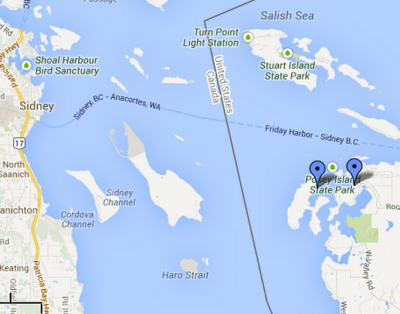 Back in the 70s, my parents owned a waterfront cabin on Henry Island. Henry is a boat-access island in the San Juans about a 40-minute boat ride from Sidney. Every summer, we would pack up supplies for a week and head over to Henry loaded to the gills with bags and food for a week of "cabin" time. Imagine 2 adults and 2 kids with friends in tow in a 300 sq ft room with no running water for a week and you will start to get the picture.

Our trips were filled with typical boating moments (i.e. mishaps). For example, one year we arrived at the cabin to discover that the homemade dock had blown away during the winter. Aside: My dad once built a dock using the pulls from our old kitchen cupboards as cleats to tie your boat to. Ingenious, no? Enough said. Anyhow, with no dock left, from that year forth, we kept a dingy at the cabin and my dad had to swim in the frigid waters to go get it when we arrived and return it at the end of the each trip. The dreaded swim was part of the whole cabin experience and needless to say, when we got older, some of us kids were "volunteered" for the feat. Other memorable moments at the cabin include nearly being flipped over in our dingy by a pod of 9 passing whales and maneuvering a double sized cast-iron 1950s murphy bed including mattress across the bay from Roche Harbor to our cabin via a convoy of 2 small aluminum fishing boats. The first boat was filled with 7 people and the second boat was towed behind with supplies for the week and the murphy bed/mattress combo precariously balanced across the boat. It was truly miraculous that the second boat did not flip dumping the bed and all of our supplies into the ocean.

I think the cabin, with a private beach and 5 acres plus 300ft of frontage cost my parents about $25,000 back in the 70s (they later sold for around $125, 000-nice return on investment for your waterfront property). Surprisingly, waterfront real estate on Henry remains quite well priced even today. One of our humorous relatives imagined a write-up in a real estate ad for the cabin that got a lot of mileage for many years: "West Coast open plan living, wood floors (there was no flooring, just plywood) and open beamed ceilings, panoramic views with wrap around deck, etc"...

The "cabin" was actually more of a shack. It was like an old miners cabin and an historic relic in itself: a single room with no insulation, propane lamps for light at night, an old 1950s ice box for a fridge and a small pot-bellied stove for heat and cooking (see pic). Internet, you ask? ...lol. Not even a rotary dial phone in sight. We did have a bathroom though: a 5 x 5 room that contained a boat toilet.  Another dreaded responsibility of any trip to the cabin was emptying the toilet-thank God the kids weren't volunteered for that task! Still, waking up in the mornings with the sunrise over the ocean, Roche Harbor in the distance and bacon sizzling on the stove was a great feeling...until you found the mouse pooh on your sleeping bag...

With the cabin as our base, we explored Henry Island and visited nearby Roche Harbor and other historic sites in the San Juans. Roche Harbor is a hauntingly beautiful historic resort village featuring white painted heritage buildings with matching picturesque Church, general store, fragrant English rose gardens, waterfront pub, white picket fences and the Hotel De Haro (circa 1886). A well-known boating enclave and playground of the wealthy, the marina was (and still is) often filled with incredible yachts featuring fully paid crews, helicopters and tenders bigger than our own boat. My parents even thought they saw John Wayne's minesweeper there once! Despite not being as wealthy of many of the visitors at Roche, I fondly remember trips there. Upon arriving in the US, we had to check-in with customs and we would buy supplies and walk around a bit. Looking like the poor country cousins, we would putt up to the marina in our 24-foot boat loaded with people and supplies. As a kid I remember feeling a bit out of place and trying to keep my mouth from gaping at the amazing yachts. The good thing was that once you were on land, no one knew what size your boat was and just assumed your were a gazillionaire like everybody else (or so I liked to think).

The history of Roche is interesting and also slightly amusing. Back in the early 1800s, Roche and San Juan Island itself were occupied by the British but the proper divisions between the British Empire at the time and the US had not yet been established so Americans moved onto the island and settled as well. The Brits and the Americans lived together for some time, but it all finally came to a head with the shooting of an errant pig (belonging to an Irishman) by an American. This event triggered The Pig War of 1859. According to Wikipedia, a huge amount of military amassed in the area in preparation for full out war. At one point, there were reportedly 461 Americans with 14 cannon and 5 British Warships carrying 2, 140 men poised to fight over the boundary, at which point it was decided that  "two great nations in a war over a squabble about a pig" was foolish." In the end there were never any casualties (except the pig, of course) and the Americans got San Juan Island.  I guess they didn't think much of Henry Island at the time of the war - it was used as a target practice for the cannons according to my dad. Later, San Juan Island became known for it's production of limestone and Henry Island was also mined. Walking around Henry back in the 70s you could still see the original quarries albeit covered in years of moss and overgrowth and probably not safe to venture into.

While in Roche, we sometimes visited the historic sites including the old pioneer cemetery and the mausoleum built by John S McMillan who owned the limestone quarry around which the resort originally grew. The mausoleum featured a haunting round-table on an elevated platform surrounded by roman style pillars with seats for each family member who had passed. These sites, which you can still view today, are interesting to see and they are just a short walk from the real centre of action in Roche: the historic Hotel de Haro. The hotel grounds include the pub, the gardens and a recreation area with cabins, tennis courts, cabins and an outdoor pool. The hotel itself even had the distinction of housing President Theodore Roosevelt (a friend of the McMillan's) for a short visit in 1906. As a kid though, my favourite spot was the general store where I was transported into a whole new world of American toys and candies that I would oogle over.

Today, the general store still stands  but the resort has been enhanced substantially. A three-storey 12-suite boutique hotel and spa has been built with additional accommodation. There are several new restaurants and some new retail offerings and in the summer, there seems to be a permanent spot for arts and crafts vendors and a coffee wagon. These days more attention has been focused on the heritage of the resort so you can find the museum-like placards I mentioned sprinkled around the resort with explanations of the history; however, I can pretty much guarantee you won't find them on Henry Island:) If anyone out there has seen any, feel free to comment below and fill me in. 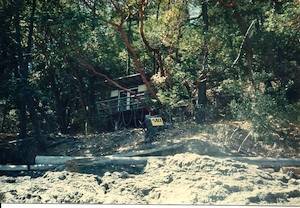 Closer view of the Henry Island cabin from the beach