BC Homeowners: Need an Extra Tax-Free $42, 500? You Just Might Qualify for a Government Housing Rebate

Jan 21 Posted by Sharleen Kneeland in BC Waterfront News

Flipping through the Thrifty Foods' magazine looking for recipe ideas before Christmas, I came across a real estate related article that piqued my interest but left me a little skeptical. The article, in advertorial format, was promoting the services of Canada's Reno Rebate Inc., a company that, together with Ontario based Rebate4U, helps homeowners apply for government rebates and grants on home purchases, building and renovations. It stated that there are "government rebates for new home purchases, owner-built homes and substantial renovations to existing homes during the tenure of the HST, and $42, 500 is the upper limit a homeowner can receive for a project."

Did you build a home, buy a home or do a major renovation during the tenure of the HST? If so, you may be eligible for a government rebate on part of the PST you paid.

Being in the real estate business, I read multiple real estate related articles and I was pretty surprised I had never heard of this before. I knew that buyers of new homes could apply for some of the HST back, but I wasn't aware of any refund for renovations. I figured if this was for real, I would have heard something about it or there must be some sort of a catch.

But then again I thought... my husband and I did some pretty substantial renovations when the HST was in place, maybe we could get some cold, hard cash ourselves? That... along with the possibility of being able to pass on the good news to my clients, my husband's clients (he owns a reno business, Main Street Renovations) and my blog readers about a possible windfall was enough to prompt me to call and find out more about this "so-called" rebate.

It turns out that Sean Leitenberg, Canada's Reno Rebate principal was just as skeptical about the rebate when his brother-in-law, in Ontario, called and told Sean that since he had recently done a major renovation to his BC home, he should look into claiming the rebate on his renovations. A retired construction advisor, Sean decided to go to his accountant, who advised him that there was no such refund, but his brother-in-law persisted and Sean looked into it further and found out that the rebate really was legit. After applying for and receiving his rebate, Sean and his brother-in-law teamed up to form Canada's Reno Rebate to spread the word and help people through all of the paperwork so they can get their refunds. Ever since they have been juggling mounds of paperwork and handing out cheques. 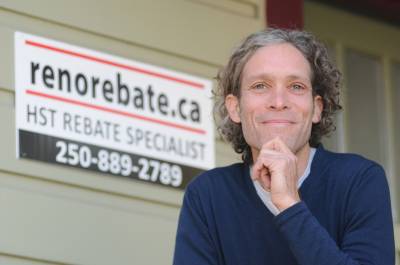 It sounds almost too good to be true, so why isn't this rebate common knowledge in BC households? It turns out that I had, in fact,  heard about the rebate and so have many of you. It's the same rebate that applied to buyers of new homes during the tenure of the HST and it's called the BC Enhanced New Housing Rebate. At the time when it came out there were many articles and stories in the media announcing its implementation.

When the HST came into effect July 1, 2010, there was an (understandable) uproar amongst builders, who complained that having to tack an extra 7% onto the sale price of their new homes was going to hurt business. In response, the government came out with the rebate, allowing buyers to claim a portion of the PST (71.43% to be exact) paid on the purchase of their new homes. Initially, this rebate was maxed out to buyers purchasing or building homes up to $500, 000, but in 2012, the threshold was increased for homes up to $850, 000.

Now here's the kicker....the BC Enhanced New Housing Rebate applies to more than just new home purchases. Sean says that most large-scale builders have known about the rebate and their buyers (or the builders themselves*) have been claiming it since it's inception, but that many homeowners and smaller owner-builders are not aware that this rebate may also apply to them. Furthermore, matters are complicated by the fact that it is a provincial sales tax rebate but the federal government handles it. Even finding the information about the rebate on the government websites is difficult (imagine that?). The refund applies to 71.43% of the PST spent on materials and labour for major home renovations, new home purchases and owner-built homes during the time that the HST was in place. Also, home owners who hired a contractor can apply for a refund for this portion of the PST they paid to their contractor. How's that for a windfall? 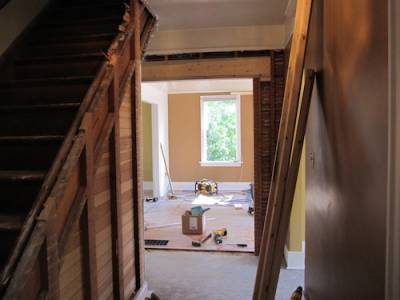 If your reno looked something like this (walls ripped down to the studs everywhere), there's a chance you might qualify for the rebate.

So by now, dear blog readers, you are probably asking yourselves if you or someone you know might qualify for this rebate? Well, if you are thinking to yourself "Hey, we did a major kitchen reno and fixed up our bathroom...maybe we will qualify?" No dice. Basically, Sean says, if you enter the home and it looks like a completely different home than before your reno (i.e. whole home completely changed, walls taken out, new drywall and ceilings or ripped down to the studs, etc...) then you probably have an excellent chance of getting the refund. Likewise, if you are an owner-builder, bought a new home or hired a contractor to build your home during the HST and have not taken advantage of the refund, you should definitely investigate further. Hopefully you saved your receipts (and if you have your building permits, even better)!

There is one very important thing to take note of: the deadline to apply for the refund is 2 years from the time you finished your build, renovation or purchased your new home. Many of the refunds have already been settled (or lost if people didn't claim them); however, there is still some time to claim if you finished your build or purchased less than 2 years ago and it was when the HST was still in place - so time is ticking.

If you would like to find out more, there are two ways to get more information:

Reno Rebate works directly with CRA to help process refunds and wade through all of the paperwork on your behalf. Usually refunds take around 4 weeks to arrive. They have a 98% success rate and reps in different communities. There is no up-front fee and their commission (20%) is taken only when you receive your refund. They also include free courier services. Sean says the average rebate is around $12,000 - $14, 000.

When I went online to find resources on how to claim a refund, there was a plethora of confusing information, but I did manage to find this link with claim forms and a phone number: 1-800-959-5525.

I hope I have helped some of you take advantage of a refund you didn't know you had coming!

*Builders could also opt to lower the cost of the homes they were selling and/or claim the rebate themselves (although the buyer had to be made aware that the builder would be claiming it on their behalf at the time of purchase - obviously.)

Note: I did not receive any compensation for this post, just thought our readers would like to know about it.